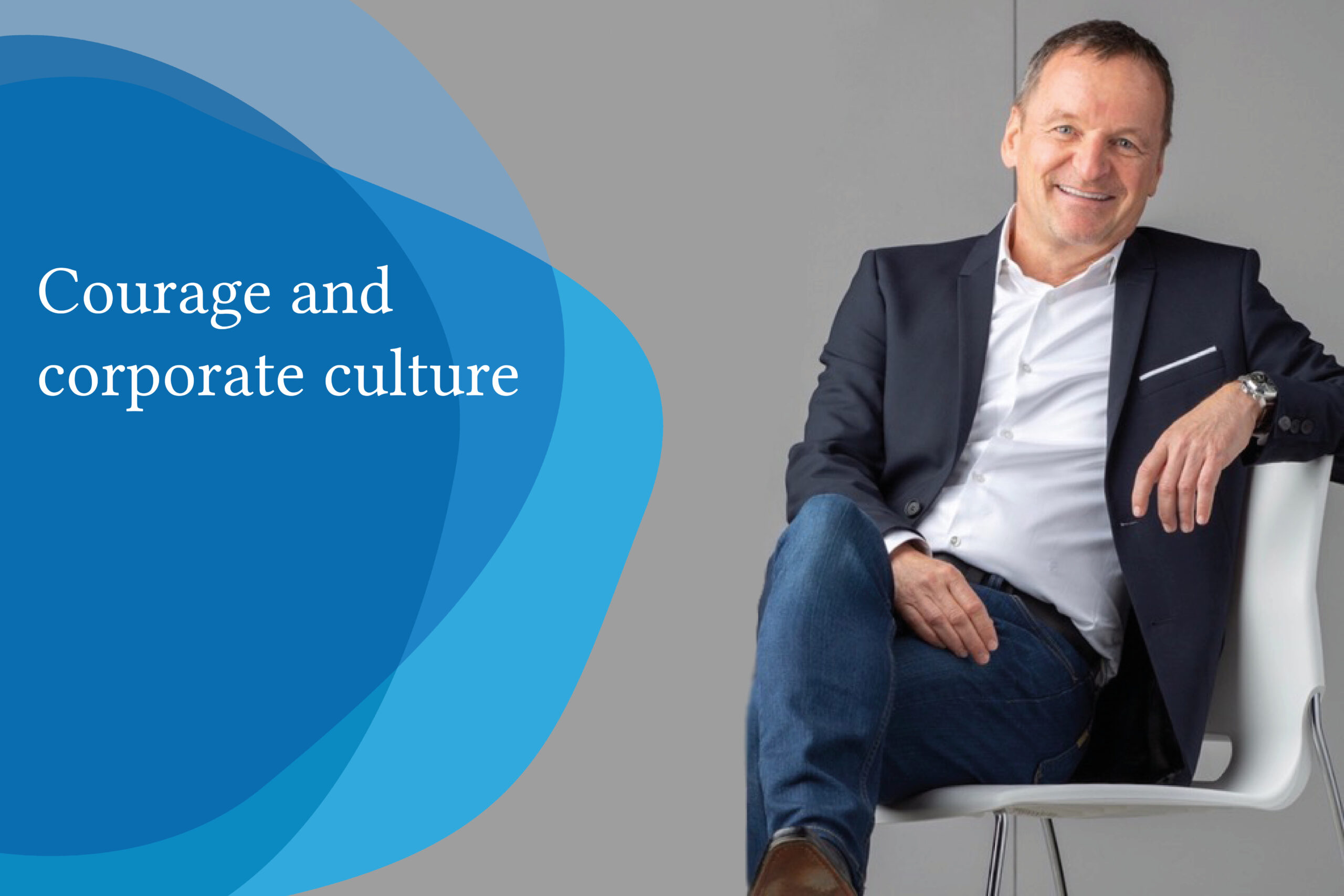 “If they work in an organisation where they think that displaying courageous behaviour doesn’t lead to success, they suppress it. But if they now see that this is something that’s role modelled and that’s wanted, and importantly, if they get the feeling over time that this is really serious and not just a flavour of the month, then they come out, so to speak.”

Says Benno Dorer, ex- CEO and Chairman of The Clorox Company, in our conversation about #courageousleadership.

In the first blog, you read about the importance of courageous leadership in Benno’s career and how you need others to support you. Now, you will hear about the relationship of culture and courage:

Florence: Allies, I think, is absolute key. Cotter says that in his book about change, that you have to have an alliance. And in the book “Now Discover Your Strength” a key item that tells you if  people are happy at work is  “Do you have someone you trust at your work?”
And if the more people have someone they truly trust, actually, the higher-performing the organisation is, because people have an emotional safety space. And that’s key for performance and creation and creativity.

Benno: Makes great sense. That’s the power of culture in an organisation. And high performing teams are teams who have a great sense of trust, where… And you can only perform risks, or risky actions, if you feel like people have your back, no matter whether you succeed or fail, and that trust is incredibly important. And I’ve always found that culture is as important of a leadership tool as strategy. And it’s precisely for that reason that culture determines how people behave every day, all people behave every day. And it’s really powerful if people do the right things and make the right decisions without supervision.

Florence: So, if you look at your time at Clorox, would you say that under your leadership, courage expanded in the organisation, because it was such a big value for you?

Benno: It’s what our employees say, yes, in employee surveys. We also had a big culture initiative that we call, “Be bold” so we wanted people to act more boldly, and we had a lot of discussions around what that means.

And we brought in people who represent that and we rewarded people for it, both in their performance reviews, as well as through awards. And we tracked how people felt about the organisation’s ability to be bolder, which is perhaps a translation of, be more courageous. And it showed in actions. It showed up in other metrics like speed to market on initiatives, the types of initiatives that will precede sales growth, various metrics that are related, all pointed in the right direction. So I would say yes.

Florence: And would you say that to change the culture at Clorox, how important was it to bring either new people in and/or to push the courageous people upwards?

Benno: It’s a combination of a lot of things. Changing cultures, of course, is very difficult. Most culture initiatives in organisations fail. I brought in some new people, I definitely promoted a lot of people who stood for the leadership that I talked about, but the most important thing perhaps was to get past the stage where there’s leaders preaching on a podium, but where you engage leaders at various levels of an organisation and in various geographies, and you build a network of, call them culture promoters in all parts of the organisation.

And in particular also involving the younger generation of leaders. So peer-to-peer culture change is incredibly useful and helps make it a lot more organic than sort of leaders… Senior leaders in an organisation preaching. I would point to finding people in the organisation that are passionate about it is incredibly important. Also, what I found is it’s really helpful to express the idea that, it doesn’t matter where you are today. On a scale of one to 10, it doesn’t matter whether you’re at a one or at a nine. What matters is that if you’re at a nine, you go to 10. If you’re at one, you go to two and then you go to three and you go to four. So it’s about progress. It’s not about everybody being the same, because it’s important for people to feel like they can still be themselves. Everybody needs to stay true to who they are. But everybody can just take one step every day.

Florence: Which means that you want to have a real growth mindset with everybody that they understand, “I’m not fixed.”

Benno: It’s a journey and we’re not asking you to be someone who you’re not. So what’s risky, of course, if you’re creating a culture like this is that people misunderstand it as everybody needs to be the same and we’re only hiring people that are loud and bold, etcetera. That’s not what this is about, but it’s about collectively taking steps, little steps, while staying true to a culture that’s diverse and that values people who are authentically themselves and who are not like everybody else.

Florence: And did you witness personal breakthroughs from leaders who started on the fence when you started and they came over?

Benno: For sure, there are a lot of people who do what they think is leading to success. If they work in an organisation where they think that displaying courageous behaviour doesn’t lead to success, they suppress it. But if they now see that this is something that’s role modelled and that’s wanted, and importantly, if they get the feeling over time that this is really serious and not just a flavour of the month, then they come out, so to speak. And they come out a little bit at a time. Try it out first and see if it feels good, at least it’s rewarded, then come out a little bit more. So I think that that was quite common.

Florence: But did you see people that were actually leaving because they didn’t like it?

Benno: Yes, had that too. In particular, people who had been with the organisation for a very long time and just liked to perhaps… Let’s call it hide or just do things the way things were always done. So that’s certainly something we needed to take into account that it would lead to more turnover which in some cases it did and among some populations it did, but in the long run, for the health of an organisation, unfortunately that’s a good change.

Florence: Is there anything else where you would say, this is essential for creating more courageous leadership and a courageous culture?

Benno: It’s easier to do if you have a burning platform. If the company’s future is threatened right away, courageous behaviour happens overnight. What was more difficult for us was that the company was actually successful and so we needed to create a burning platform. That’s really important. You need to let people know why. Not just how to behave, but why. So we needed to point to disruptions and categories and two companies around us, we needed to talk about how consumer behaviour is changing, we needed to talk about how technology is changing, and we needed to create that burning platform. That’s really, really essential. Without… It’s human. Humans act upon crisis, but humans don’t like to act in prevention of a crisis. What’s motivating is fixing a crisis. So helping the organisation understand that there’s a crisis, really changes everything.

Florence: One more question regarding the role of courage. You started with saying, you need a moral compass, and doubting that there is a lot of observations or no moral compass in the world and where you have short lived success like Instagram followers, net worth or things like that dominating behavior. What do you believe about the moral compass in corporate world? If you are hiring, you really want to see that moral compass?

Benno: I do. I always look at who people are, and I want to see people who do things really… And have a track record of doing things out of conviction and out of belief and not to check off boxes. And you know what gives me most optimism is that there’s, if we take ESG for instance, companies that take a long-term view of success and dedicate themselves through ESG in the long run are more successful. And as a CEO I’ve always looked at the role, yes, you have to deliver quarters, but the most important thing is to deliver long-term shareholder value. And companies that take a long-term view, companies that invest in structural things, a lot of them not as popular at first, in the long run tend to be more successful. Companies that are opportunistic and that focus on quarters and on delivering short-term expectations in the long run, again, in the long run are far less successful.

This correlation is important, right? Because as a CEO, yeah, I can’t be successful if I preach courage and it’s not backed up by numbers. So numbers ultimately need to follow, not every quarter, but you know, in the long run, and they do. There are studies here in the United States by various universities. There’s a long-term McKinsey study, and they all make that very, very clear. So you can do things with a strong eye on a moral compass and values and self-interest. Those don’t have to be two separate motivations. They can be one and the same and support each other.

Florence: Has anyone ever been courageous for you?

Benno: Yeah, for sure. I mean, in my company, early on I was the only company outsider who joined the leadership team, which naturally meant that I had a lot of different views. And in the beginning, that can be somewhat lonely, and I can remember of people speaking up and supporting me in meetings, and it does feel good and it does positively reinforce the behavior, that’s for sure.

We talked about this earlier, it can be lonely to be courageous. To have allies, to have people around you – and it doesn’t have to be your manager or boss – but peers actually is as powerful. I recommend to look out for and be a buddy for people who do something that is courageous, and to acknowledge that it is really, really important.

In the next blog, you will read how Benno sees the role of corporate leaders in taking necessary courageous actions on ESG and how even big companies can transform.