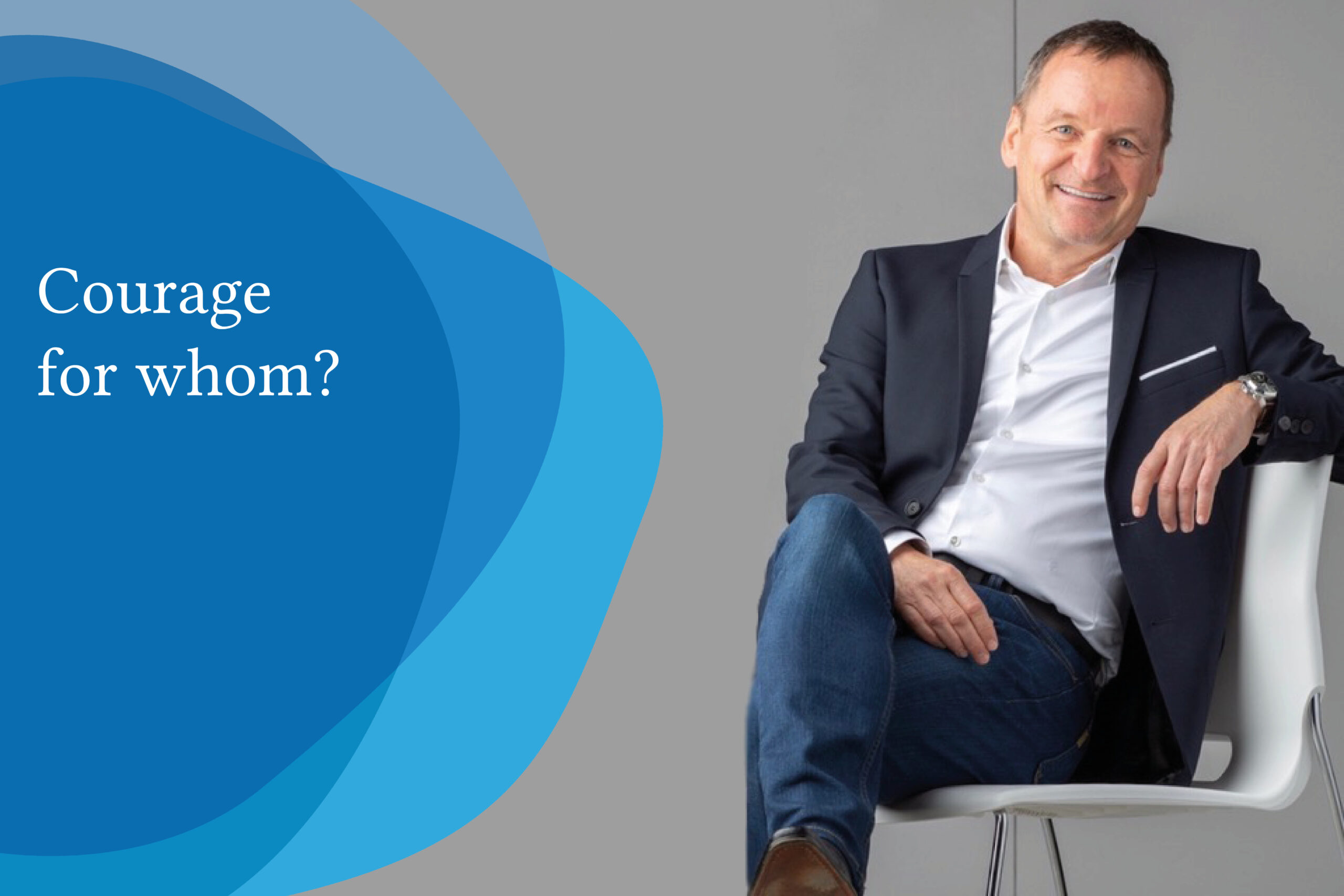 “…there, they are a lot of leaders who have a lot of courage. And in fact, they are attracted by these small companies because they’re able to display more courage, the type of courage that they’re not able to show in larger companies.”

Says Benno Dorer, ex- CEO and Chairman of The Clorox Company, in our conversation about #courageousleadership.

In the previous blogs you read about the importance of courageous leadership and how to foster it in organisations. Hear Benno’s perspective on corporations and ESG, how big can learn from small and what motivates individuals to be courageous.

Benno: I’m in the San Francisco Bay area, and there’s a lot of small companies. And I’m right now working as an advisor for one of the major private equity companies. I look at the smaller to medium-sized companies, and there’s a lot of leaders that have a lot of courage. And in fact, they are attracted by these small companies because they’re able to display more courage, the type of courage that they’re not able to show in larger companies. And those disruptive companies are very successful against larger, more established companies precisely because larger, more established companies are focused on maintaining and incrementally building in an environment where technology and access to capital is everywhere and makes it quite straightforward for companies to disrupt.

Florence: I’m just thinking of one of my consulting clients, a smaller company, there are a lot of people who are too scared to my taste. You believe it’s an issue of size of company?

Benno: Not necessarily solely, but I do think a lot of it has to do with, what fundamentally is the mission of the organisation and what do leaders role model? So I find that it’s maybe a broader phenomenon in society that there’s a tendency to do what’s popular, and there’s a tendency to do what gives you superficial success and what allows you to look good, and that sometimes tends to go against things that are more courageous.

Florence: And what gives you hope?

Benno: That there are a lot of other examples too. My hope is that every action inspires a counter-action and I do think that there’s an emerging movement that sees the value of ethics and doing the right thing, and that is moving upon it. So if you look at the last few years, for instance, where the global discussion around sustainability, environmental sustainability took quite a bit of a hit, and took a back seat in political leadership, business leaders actually stepped up and stepped in. And a lot of businesses said, “If there is a vacuum politically, then in business, we have to act because we can act on our own and we don’t necessarily need regulations to make a difference.” And the progress in the last few years has been very remarkable. And if you look at ESG more broadly, which is a movement that has emerged organically and not through pressure, because people have stepped up courageously, I would say, and have started to volunteer measures and put companies on a mission towards substantial improvements, that’s a really good example of success, or here in the United States where the emerging racism that we see here everywhere against Black Americans, against Asian Americans, again, business leaders have stepped in and leaders around society have stepped in, and the voices are being heard. So I believe, I’m generally an optimist, I believe that there’s enough role models and there’s enough examples where it has… Where we’ve seen courage at play, and where it’s also been successful. So I think that could be a snowball effect here that could hopefully lead to more people following.

Benno: Yeah, not all of them but some of them, many of them. Because I think this is what I’ve said then is quite the commonplace knowledge and commonly accepted that companies have to change and a lot of large companies implement systems and processes that make them more agile. A lot of people think through, “If we were to disrupt ourselves, how would we do that, and then how can we put things in place that widen our moat and make us more competitive in a disruptive situation?” So I feel like that’s all happening.

Florence: I agree that that is happening while I want to challenge if the cultural ingredient you have just described is happening, because you cannot walk through disruption.

Benno: Yeah, I think there’s enough examples still of large companies that are moving. Also I want to say that… And we did this at Clorox, we bought smaller businesses and we learned from them. And the historical model was for large companies to swallow small companies and then tear them apart and make them look and feel more like large organisations, and there’s increasingly cases and examples of companies that have bought smaller companies and that have learned from them and have begun to model their mother company after the richness and culture of the small companies. And you have large companies increasingly have sub-cultures across different businesses and regions, and the idea of one-size-fits-all and we all got to act the same way, no matter whether we’re working on a small or big business or a small geography or big geography inside of a large company, I think that’s yesterday’s news. And increasingly people are adapting and some of them are adapting quite well, not all of them but some of them. Sure.

Florence: would you think that those that adapt it’s because the CEO really wants it?

Benno: That’s a very important factor. And you look at the age of CEOs is coming down quite significantly. The style, the leadership style of CEOs is changing quite significantly, which means that the new generation of CEOs is more tuned in, more technologically savvy, more operationally-minded, more direct. It’s a different generation, so those are things that come into play. So I think that plays a very important role, but other things that are playing a role are, of course, board of directors. Board hire CEOs, so boards are changing quite dramatically, they’re becoming more diverse and age of board of directors or the diversity of… Age diversity of boards come down quite a bit, and it’s just necessity. Companies look at what’s successful, and increasingly it’s a different kind of culture. So companies and company leaders generally are smart and they go where success is. And I do believe that increasingly courage leads to more success. There are enough examples, and I think there is a movement underway that has quite a bit of momentum.

Florence: Courage – it’s such a fascinating topic because the more you talk about it, everybody recognise the life-shaping role it has in your own life. And when you become open to new experiences, and you allow for life to happen, it doesn’t always turn out well, yet you learn so much more than staying in your comfort zone.

Benno: Maybe the one aspect, which I don’t know if we’ve touched upon as extensively is that, what is the primary motivation to be courageous? And I feel like if the motivation is all about self, courage is a harder thing to display, but if the primary motivation is about whatever the community is, it could be a company or a society or what’s the right thing for society? What’s the right thing for a family? What’s the right thing for company?
And having the moral compass to display courage, I think is more obvious, a more obvious thing to display, and we live in a global society that is a lot about self. Individual liberties, individual freedoms, individual success, individual… You name it. I think a secret to more courageous communities is a re-orientation towards community benefit. The greater good, so to speak. And that’s where leaders, whether it’s company leaders or political leaders or other society leaders can make quite a big difference. So if you think about the pandemic right now, do you emphasise your own desire to go out and have dinner tomorrow the way we were able to before the pandemic, and is that the focus? Or is it that all members of a society right now, owe it to the weak and vulnerable to protect them?

The conversation and the frustration is a lot because of the emphasis on the individual freedom. And to know that there can be no individual freedom without freedom for everyone, and that it’s a moral responsibility to be in service of the most vulnerable, because at some point that could be us, that’s a discussion that I would like to see more often, and that would also lead to more courage.

Florence: I’m hesitant on one point because I’m working as an executive coach too and there is a courage for the self that I believe is truly healthy because it’s not selfish, but it just… listen to what is good and right for you. Even listening to my moral compass can be very self-orientated. So for me, it is about striking the right balance for what is really right and good for me and what gets me, a happy life because that’s what I want everybody to have. Sometimes I work with people who have never checked what do I really want here? They can only tell you how they deliver on everybody else’s needs.

Benno: Not an easy conversation to have. But in my mind, again, so I feel like everybody else’s needs and one’s own needs ultimately aren’t separate topics, but they’re the same.