Do you have a moral compass? – A conversation about courage. Florence interviews Benno Dorer, Ex-CEO & Chairman of The Clorox Company 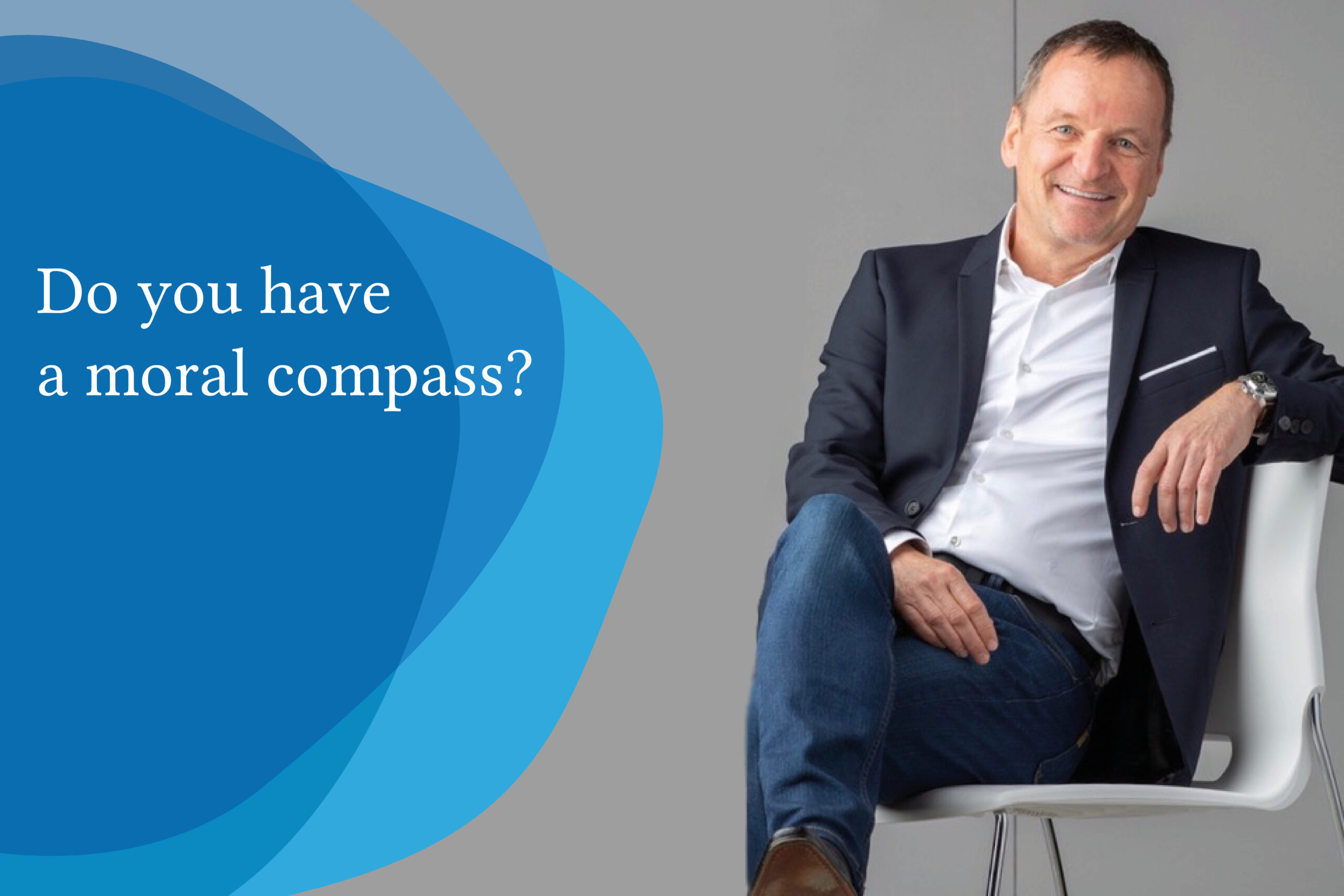 „Courage starts with: do you have a moral compass.”

Says Benno Dorer, ex- CEO and Chairman of The Clorox Company, in our conversation about #courageousleadership. Earlier this year, we explored the most important aspects of that transformational capacity: being courageous.

The moral compass, role modeling, and promoting the courageous are at the center of Benno’s perspective on courage in corporate life. Read in this first part of the interview what courage means to Benno and how this played out in Benno’s career.

Florence: In my work as a coach and strategy consultant, I meet leaders and employees who seem to be lacking courage to make bold moves, who prefer to stay in their comfort zone. What is your perception?

Benno: Doing things that are more courageous, is more difficult, is more work, often has a longer lead time to success, and success is more uncertain. And it also requires a deep belief in yourself, and it does require convictions, and it does require a strong moral compass. And I would say that there’s a crisis in all of those aspects. We live in a moral crisis I think. If you think about what’s happening around the world and politics and with our communities, we live in a self-society and not in a community-based society, and we live in a society that’s quite superficial, where success is to have followers on Instagram or TikTok.
(…) those things are easier to obtain and are quite measurable. And as a result, people focus on that and the reality is that success often follows. People do what gets them successful. People do what is being rewarded. And I think not just in the business world but in society at large. It’s not everywhere, but there are many examples of people who become rewarded for doing the easy things, not the right things.

Florence: And what gives you hope?

Benno: That there are a lot of other examples too. My hope is that every action inspires a counter-action and I do think that there’s an emerging movement that sees the value of ethics and doing the right thing, and that is moving upon it. So if you look at the last few years, for instance, where the global discussion around sustainability, environmental sustainability took quite a bit of a hit, and took a back seat in political leadership, business leaders actually stepped up and stepped in.

Florence: And when you say that, role modelling, the ethics, and the courage are so important overall, how can that play out in the corporate context?

Benno:  What’s courage in the corporate context? So maybe in any context, but if we talk about the corporate context, courage is if you have a strong conviction on what is right, either what is the right thing to do, or the right thing to say, and then you act upon that and you stand for that, even though it may be perceived as risky or unpopular, or even it frightens you. So it all starts with, do you have a moral compass? Is your action based on values? Is your action based on strong conviction? Do you know that’s an essential quality of leadership, in my mind? Leadership is not to say what people want to hear. Leadership is about saying or doing what’s necessary, even if it’s unpopular.
That’s how I’ve lived my corporate life and that’s also how I’ve actually been quite successful. And I have chosen my successor at the company that I’ve worked for, and that I was a CEO at primarily because I first discovered her as a very courageous person. She was a junior person in a meeting of a senior leadership team, and she was the one to speak up and fight for her convictions. And I took notice. And it’s a quality of leadership.

Florence: which would mean that one way for a leader to create more courage is to reward courageous behavior, to take notice and to enforce it.

Benno: How do we create culture or behaviour as leaders in an organisation? The two biggest things we can do is, first, role model. Even in difficult situations, or in particular, in difficult situations. And then second, reward the people who display the behaviour that we believe is right, or display the values that we believe are right. And if you want to add a third one, you could add just to instill values in an organisation and not just focus on talking about strategies in an organisation and business plans and priorities.
But talk about values. How do we make decisions? (…) In April 2020, our disinfecting products, because of the pandemic became even more popular than they were already and we had a severe shortage of product and we needed to figure out how are we going to make decisions as an organisation in the face of a lot of ambiguity, in the face of this crisis that we all had to manage, and in the face of a dramatic product shortage, because consumption went up 500% overnight in some of the categories.
We could have chosen maximizing profits or prioritising strategic customers, and there’s all kinds of things that companies do. And what we’ve said is in the beginning of the crisis, that the only basis for decision that we are going to use is doing the right thing. We asked ourselves, and we said: “That’s how we’re going to empower leaders: Ask yourself, “What is the right thing?” And then do that.”And what that did, for instance, in disinfecting products was that we were out of stock in a pretty severe fashion in traditional retail stores because we supplied the products to caregivers and hospitals, because we could save lives.
But it came with severe consequences, but it’s the right thing to do. If you can save lives, then that’s what you do. Because you don’t wanna look in the mirror afterwards and feel like you have been opportunistic and done something that wasn’t consistent with the value of doing the right thing.

Florence: Could you tell me an example when you, with hindsight, had a difficult and courageous moment, when you really had to go for the full risk?

Benno: I don’t know if it’s the most difficult or most courageous, but if we stay in the corporate context, I was one of two people competing for the CEO role of the company that I was with, Clorox. And the predecessor, as he was getting close to retirement, he was very successful, and the company had been very successful then, and he was very well respected in the industry and by the board. So in those situations, people generally, boards generally, hire a successor that stands for a continuation of the status quo, and that’s what my colleague, who was the other co-chief operating officer stood for. And I had to make a decision how I want to convince the board to choose me and not him. And the popular thing would have been to position myself as the right continuity candidate. That would have been the safe thing to do, just to emphasise continuity and then use other intangibles to become selected. But I felt like we needed quite significant change. I felt like we needed a different culture. I felt like we needed to adopt a different idea of growth. I felt like we needed to invest a lot more in our brands and our innovation, and I felt like we needed to make more people changes also. All because businesses that were relying on the things that used to work in the previous decade wouldn’t be successful in the next decade because of an environment that is so disruptive. So I decided, if I’m going to win or lose this, I’m gonna do then… Win or lose, this my way. And I decided I’m going to fight for what I believe in. And I slowly won people over, but it took a while, and it was risky, and I made backup plans [laughter] because I wasn’t sure if I’d be successful, but it felt good.
And I felt as I was beginning to develop my voice with the board and the senior executive group that it felt really authentic and it felt true and it didn’t feel fake. And when leaders are authentic and speak what they believe is the truth, they also become more convincing.
It was a process, but eventually I was able to gain the board’s support. And if you so will, even though I probably would have had a decent career, otherwise, too, I put my future with the company that I loved on the line for something that I believed in. So again, I don’t know if it’s the most courageous thing that I’ve done, but it’s certainly been one of the most life-changing ones.

Florence: Yes, that’s the other fascinating piece about courage is that whoever displayed and lived up to their courage for something significant, we all say that was life-changing.

Benno: It is. It is. And of course, it’s easier if it’s being rewarded by the community around you or the people around you. That has an incredibly profound effect.
Which is why as leaders, and as we develop the next generation of leaders, it’s a good reminder how important role modelling, but also rewarding and supporting, even if it’s only emotionally supporting somebody who’s done something courageous, really is, because being courageous can be lonely. And what you need at that time is somebody who stands by you to support you. It’s incredibly important for people to keep going because if…

Florence: And whom did you have to stand by you? Because you said that this was a process, not done in a moment of “Here I am. And I’m changing everything.”

Benno: In the beginning, it’s a natural process, that you find people who will become allies who help you pull. So I had people I respected who supported my view of the world at that company at the time. Forming a community and understanding, “Who do I need to convince next?” And then slowly winning people over is incredibly important.

… read on in the next blog how culture and courage are related, and what Benno did to enroll his organization.

The company more than doubled total shareholder return during the 6 years of his CEO tenure, significantly outperforming its peer group.